Yesterday the import of the OpenGovernment tree cadastre of vienna was performed. The data used for the import is from the 27th of November 2012. 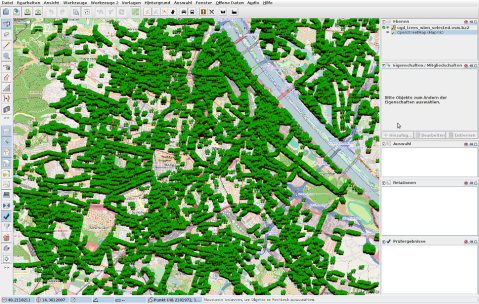 The OGD Cadastre of Trees prior to the Import

The final dataset which was used for the import can be found here (http://gisforge.no-ip.org:5984/datastore/osm/ogd_trees_wien_selected.osm.bz2) while the trees that have been omitted can be downloaded here (http://gisforge.no-ip.org:5984/datastore/osm/ogd_trees_wien_notselected.osm.bz2).

Changes to the Original Method

The method used is the one as is described in previous posts with the exception that the substitution of certain entries in the original dataset was done by the python script and not manually by the user.

As was proposed by Friedrich Volkmann, every entry that does not fulfill the following criteria is marked with a the tag “fixme=Baum oder Strauch“.

This means that every entry in the cadastre of trees which is smaller than 2 meters but is older than 3 years is suspiciously small in size and should be checked manually.

As can be seen by the following image (area around “Urban Loritz Platz”), already mapped trees could successfully be removed from the dataset. No trees are mapped multiple times or are removed.

The dataset with omitted trees can be downloaded by the link provided at the top of this post.

The most impressing thing about the import are the parks. While it can get a bit confusing, the many green dots give a good idea of the tree cover.

Trees in the Stadtpark

Another significant display of the imported trees is their position besides streets: 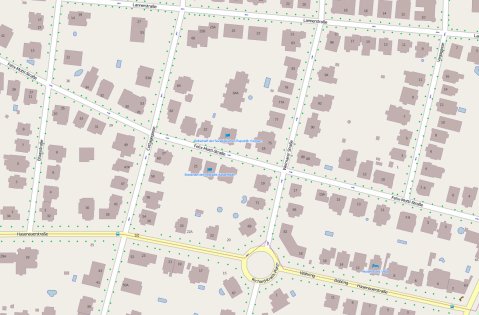 Trees along Streets in the “Cottageviertel”

The display of trees should provide the reader of the map a more thorough impression of the area he is looking for. But this might also just be too much information and make the map less readable. This is open to debate.

Interestingly, the linear structure of the imported trees can be used to detect poorly mapped streets. This is the case when e.g. a row of trees crosses the actual street which is only true in rare cases.

What has yet to be performed is the conflation of attributes of already mapped trees with the OGD cadastre of trees. On problem that arises here is that the provided reference number for trees is not unique. Maybe it never was intended to be unique or the data provided does not contain all information necessary. Either way, one has to perform an additional search by location to distinctly identify a tree.